In a high-level virtual conference attended by more than 200 participants, the European sectoral social partners, the European Federation of Building and Woodworkers (EFBWW) and the European Construction Industry Federation (FIEC), presented their joint recommendations to tackle undeclared work in the construction industry. 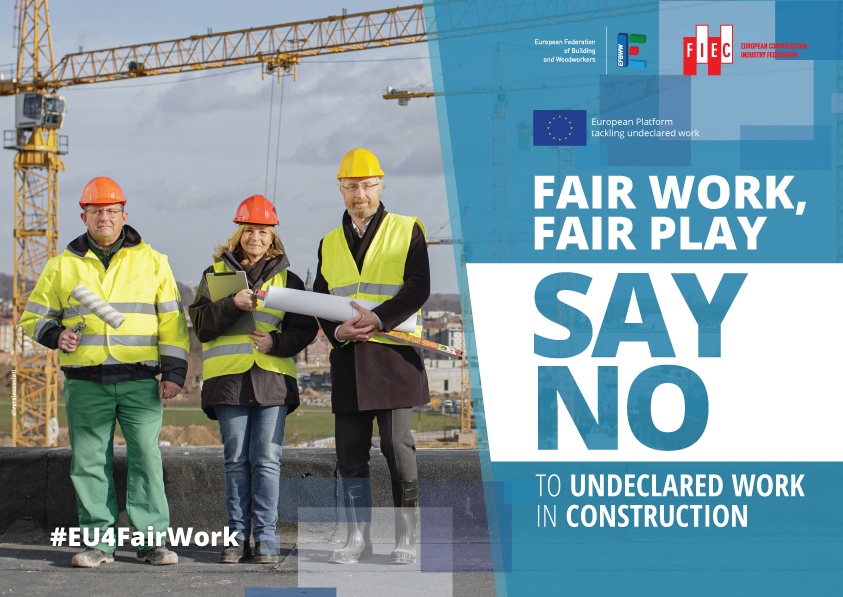 Johan Lindholm, President of the EFBWW stated that “Undeclared work in the construction industry is an essential problem, which trade unions and employers must tackle jointly, together with the authorities. This approach requires creativity, boldness and a robust policy. As trade unions we are committed to this! Digital tools such as a European social security number, social identity cards and the exchange of real-time facts, offer us possibilities to battle work life criminality and to effectively enforce counter measures against undeclared work. As EFBWW, we are very concerned about the action of those dishonest companies that contribute to a fast increase of platform workers in the construction industry and for the high number of workers, from the Ukraine, Balkan countries, Vietnam and many other non-EU countries involved in undeclared work in the construction industry.”

Joël Schons, FIEC Vice-President for Social affairs, insisted that “With undeclared work, everybody loses: companies, workers, clients, public authorities. Therefore, all stakeholders need to get involved in fighting this phenomenon. In particular, we call upon the EU Member States to increase the resources available to the various relevant administrations and ensure a better overall cooperation, at national level and cross-border. For example, Member States could create a one-stop-shop with transversal competences. We also believe that the European Labour Authority will play a key role in helping to fight cross-border fraudulent situations.”

Jordi Curell Gotor, Director of Labour Mobility at the European Commission (DG EMPL) and Interim Executive Director of the European Labour Authority (ELA), presented the opportunities that the ELA will offer at EU level in further fighting undeclared work in the sector.

The Conference was part of the European week of action to raise awareness and promote the benefits of declared work: #EU4FairWork.

Another case of severe exploitation of migrant construction workers: is the EU becoming the new Qatar?
Acquisition of Equans by Bouygues - Workers demand to be involved in talks with companies
IndustriALL, BWI and EFBWW urge Holcim shareholders to push for respect workers' rights